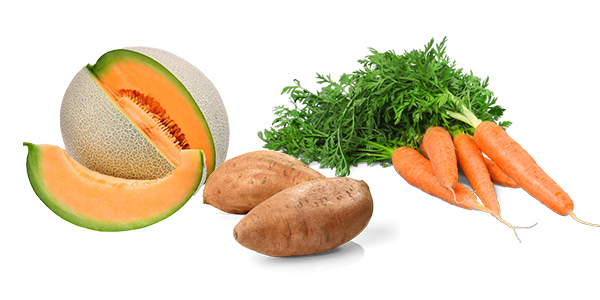 Vitamin A in Plant Foods

Our table of the RAE content of various plant foods has been moved to the Daily Needs page.

The upper limit for vitamin A applies only to the retinol form (found in animal products, fortified foods, and supplements), but does not apply to carotenoids.

Vitamin A deficiency symptoms begin with night blindness and can progress to more severe eye problems such as corneal ulcers, scarring, and blindness (1).

Vitamin A deficiency also reduces the ability to ward off infections.

Vitamin A is important for growth and development in infants and children, and for red blood cell formation.

Eating vegetables high in carotenoids with some fat has been shown to increase both the absorption and synthesis of vitamin A (2).

Many factors affect how well dietary carotenoids are absorbed and converted to vitamin A, including body composition, age, smoking, medications, alcohol consumption, food processing, and genetic variation (3, 4). As many as 50% of individuals in some populations may have a low response to beta-carotene and other carotenoids, meaning they either don’t absorb as much as others do or they don’t convert as much to vitamin A (6).

Researchers are looking into how genetic variability impacts the conversion of carotenoids into vitamin A and whether recommendations should vary according to people’s genetic type (5). But at this point, it’s not possible outside of a research setting to determine if someone has a lower response to dietary carotenoids. Even so-called “low-responders” apparently can absorb some dietary carotenoids and convert some to vitamin A (7).