Calcium and Vegan Diets: Why the Fuss?

The U.S. Recommended Dietary Allowance for calcium for adults is 1,000 to 1,200 mg per day depending on sex and age. The World Health Organization has similar recommendations (WHO, 2004). It’s practically impossible to meet these recommendations without large amounts of dairy, calcium-fortified foods, or supplements.

As you can see above, the calcium intake of vegans tends to be quite a bit lower than lacto-ovo vegetarians, non-vegetarians, and the RDA. Traditionally, the vegan community has responded to this by saying osteoporosis is a disease of calcium loss from the bones, not a lack of calcium in the diet. This was based on two pieces of evidence.

The first piece is that ecological studies have shown that the countries with the highest intakes of dairy products (northern Europe and the USA) have higher rates of hip fractures than do Asian and African countries where much less milk is consumed. This can be explained by the second piece of evidence which is that studies show that after ingesting animal protein, people urinate large amounts of calcium. Therefore, the thinking goes, calcium intake isn’t important for preventing osteoporosis and vegans are protected due to the lack of animal protein in their diets. 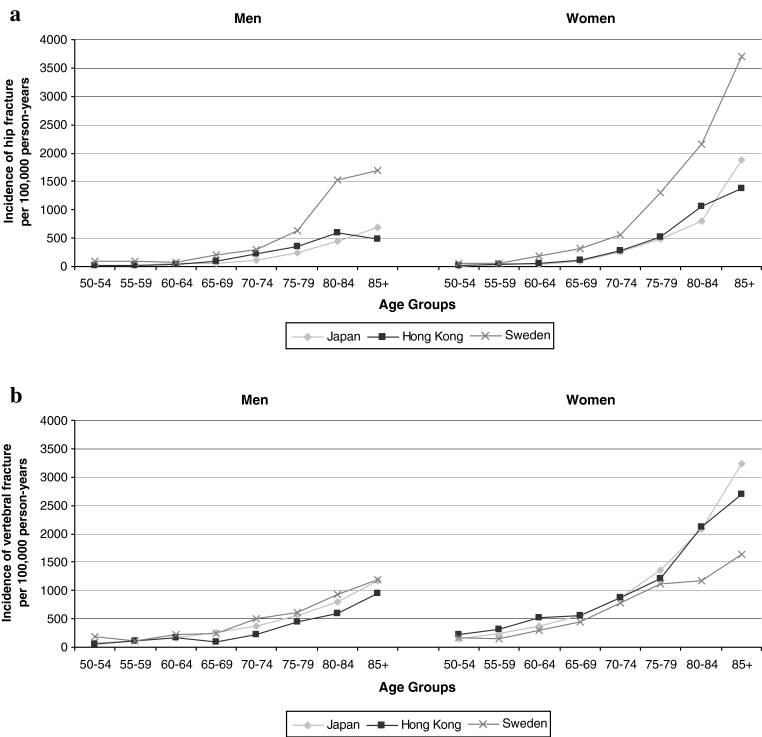 The observed ethnic differences in fracture incidences may be due to the fact that hip fracture risk was affected by fall risk, whereas the risk of vertebral fracture mostly depends on bone strength. Despite the low hip fracture rate in our population, Hong Kong women had a higher prevalence of osteoporosis than US Caucasian women (35.8% vs. 20%, respectively) and a similar prevalence of about 6% in Hong Kong and US Caucasian men.

In other words, at least in this group of people from Hong Kong, the Chinese don’t have lower rates of osteoporosis.

Shams-White, et al. (2017) conducted a meta-analysis of 20 prospective observational studies and 16 randomized controlled trials and found no significant association between dietary protein and fracture risk. There was some evidence that more protein reduced bone loss of the lumbar spine among older adults. The study was supported by the Egg Nutrition Center and Dairy Management Inc. who were said not to have had any role in the design, analysis, interpretation, or presentation of the data or the results.

In a study from France (included in the meta-analysis by Shams-White et al.), Dargent-Molina, 2008 found that among women with calcium intakes lower than 400 mg/day, protein intake, which they suggested was mostly animal protein, increased the risk of fracture. In a study from Sweden, Michaëlsson 2014 et al. (2014) found that milk consumption was positively associated with early death in both men and women, as well as fractures, especially hip fractures, in women. While statistically significant, differences weren’t large enough to indicate dairy plays more than a small role in early death or fractures.

As mentioned above, there is a theory that protein increases osteoporosis by increasing a loss of calcium through the urine. The idea is that protein, especially through the sulfur-containing amino acids, increases the acid in the blood which, in turn, gets shuttled to the urine, increasing the renal acid load. In order to neutralize that acid, calcium is used as a buffer and then urinated out with the acid.

There has been an enormous amount of research on protein and bone health and this view of protein causing osteoporosis has been refuted. Here are some of the main points of a 2012 literature review (Calvez, 2012) of clinical trials on the subject:

Although HP [high protein] diets induce an increase in net acid and urinary calcium excretion, they do not seem to be linked to impaired calcium balance and no clinical data support the hypothesis of a detrimental effect of HP diet on bone health, except in the context of inadequate calcium supply.

Another 2009 meta-analysis found that among five well-designed studies measuring calcium balance, net acid excretion was not associated with either decreased calcium balance or a marker of bone deterioration (Fenton, 2009).

If animal protein doesn’t cause osteoporosis, what does?

Genetics likely play a strong role in osteoporosis, and, possibly related, estrogen levels in women. Among factors that can be controlled by lifestyle and diet, there has been evidence for the following:

Research has shown that, on average, Americans are getting enough calcium. Bischoff-Ferrari, et al. (2007) conducted a meta-analysis of prospective studies and randomized controlled trials and found that calcium intake and calcium supplements were not associated with a lower risk for hip fractures. Bolland, et al. (2015) conducted a meta-analysis of 44 cohort studies and found that dietary calcium between about 800 to 1,000 mg per day isn’t associated with risk of fracture, and there’s no evidence that increasing dietary calcium within that range or higher prevents fractures. An exception is that calcium and vitamin D supplements have been found to help women aged 69 to 106 years old who normally have low calcium intake and poor vitamin D status.

Vitamin B12 and Bone Mineral Density

Taking vitamin B12 might also be important for bone mineral density.

A cross-sectional study from Germany found that male vegans and lacto-ovo-vegetarians had similar markers of bone turnover to each other, but higher markers than male omnivores (Herrmann, 2009). The vegans had a rather high average methylmalonic acid level of 727 nmol/l, indicative of significant vitamin B12 deficiency. None of the participants were taking B12, calcium, or vitamin D supplements. Upon stratifying the subjects into two groups based on their B12 status, the group with poor B12 status had higher markers of bone turnover. However, since almost all the people in the poor B12 status group were vegan or vegetarian (62 out of 63), and few vegans or vegetarians were in the replete B12 group (6 out of 66), it’s not clear that the increased bone turnover markers were due to poor B12 status or some other factor common to vegans and vegetarians.

In a prospective study from the U.K. of 1,144 post-menopausal women with normal thyroid function, higher selenium levels were associated with greater bone mineral density (Hoag, 2012). Although selenium metabolism is involved in thyroid function, the study found that the associations between selenium and bone mineral density were independent of thyroid function. After 6 years of follow-up, selenium levels were not associated with bone fractures. Because selenium intakes can be low in vegan diets in some countries, it’s important that vegans in those countries ensure an adequate source (see Selenium).

A Denmark study found that vegans (n=78) had higher levels of parathyroid hormone (PTH) and bone-specific alkaline phosphatase (BAP) than omnivores (n=78) (Hansen, 2018). Vegan PTH was within the normal range while BAP might have been slightly elevated for a small number of vegans. It’s not clear if these markers were of clinical significance.

A report from EPIC-Oxford (Tong, 2020) found a higher rate of bone fracture among vegans without any obvious explanation. Although vegans had a lower average calcium intake (591 mg/day compared to ~1,000 mg/day for other diet groups), there was little association between calcium intakes and a higher risk of fracture. See Bone Fractures among U.K. Vegans: Implications and Recommendations for more information.

A previous analysis from EPIC-Oxford (Appleby, 2007) found vegans to have a 30% higher fracture rate than meat-eaters (RR 1.30, CI 1.02-1.66) after adjusting for smoking, alcohol, body mass index, walking, cycling, vigorous exercise, other exercise, physical activity at work, marital status, parity and hormone replacement therapy. When the results were adjusted for calcium intake, the vegans no longer had a higher fracture rate. Among the subjects whose diets contained ≥525 mg of calcium a day (only 55% of the vegans compared to about 95% of the other diet groups), vegans had the same fracture rates as the other diet groups.

Thorpe et al. (2021) published a report from the Adventist Health Study-2 comparing hip fracture rates of different diet groups among white participants only (due to their generally poorer bone health) who were 45 years or older.

Female vegans had a higher risk of hip fracture compared to non-vegetarians (HR 1.55, CI 1.06-2.26). These findings were adjusted for weight and height, but not for body mass index (BMI), so it’s hard to know if the difference is mainly due to the lower BMI of vegans which has been found in the Adventist Health Study-2 (see Cardiovascular Disease Markers of Vegans: 2013 Report from Adventist Health Study-2).

The findings were also adjusted for total calcium intake and total vitamin D intake, but not for protein intake. The table below shows the intakes of vegans and nonvegetarians. 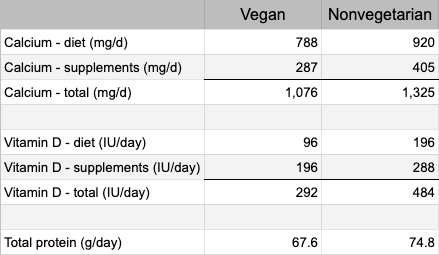 Ho-Pham et al. (2011) studied 88 vegans and 93 omnivores. After two years of follow-up, 5 vegans and 5 omnivores had sustained a new vertebral fracture; there was no significant difference between the two groups.

Ten fractures in 181 women in two years is high. The rate of vertebral fracture in women over 65 in Hong Kong and Japan is 594/100,000 person-years (Ho-Pham, 2009a). The fracture rate in this Buddhist nun study works out to be 2,762/100,000 person-years. The fractures in the Buddhist nun study were determined by x-raying each subject, rather than reporting a bone break, and would likely find more fractures than the study determining the 594/100,000 rate.

In summary, compared to non-vegetarian Buddhist nuns, vegan nuns had a similar rate of vertebral fractures, but it appears that the rates for both groups were high.

For calcium amounts and absorption rates of various plant foods, please see the table Calcium and Oxalate Content of Foods. Most of the calcium amounts in that table come from the USDA nutrient database, which lists an average of the samples they’ve analyzed. The amount of calcium in plant foods is somewhat dependent on the amount of calcium in the soil (Weaver, 2013).

The DRI for calcium is roughly based on an average absorption of calcium from foods of 25% (p. 38 in reference DRI Dietary Reference Intakes, 2011). This means adults should aim to absorb about 250 mg of calcium per day.

As a calcium dose increases, the percentage absorbed decreases. Beyond the size of the dose of calcium, the oxalate level in plant foods is the main determinant of how much calcium can be absorbed.

See Calcium and Oxalate Content of Foods for how much calcium is absorbed from various plant foods, along with references and details for this summary of calcium in plant foods:

Some research has linked calcium supplements with an increased risk of cardiovascular disease. These studies have mostly found a link in people getting well over the DRI for calcium (more info) with the effect stronger in smokers.

Another study looking at calcification of the arteries found a cross-sectional correlation at baseline, but no prospective association (Wang, 2010).

The Framingham Study measured calcium intakes and followed participants for four years at which time they measured the amount of calcification of their arteries (Samelson, 2012). They found no correlation or trends with calcium intake and calcification of the arteries in amounts up to about 3,000 mg per day in either men or women or for calcium supplements of 500 mg per day or more compared to no supplements or up to 500 mg per day. See also No Need to Worry About Calcium and Your Heart from the Tufts Health & Nutrition Letter (November, 2019).

To be safe, it might be best not to increase calcium intake above 1,400 mg per day. People with chronic kidney disease should talk to their physicians about the pros and cons of calcium supplements.

Conclusion on Calcium and Vegan Diets

There is no reason to think that vegans are protected from osteoporosis more than other diet groups, and they should strive to meet calcium recommendations. Although it’s possible to meet calcium recommendations by eating greens alone (see chart), the average vegan probably won’t meet recommendations without drinking a glass of fortified drink each day, eating calcium-set tofu, or taking a 250-300 mg supplement (in addition to eating an otherwise balanced diet). Although it’s important to get enough calcium, don’t ingest more than 1,400 mg of calcium per day without the supervision of a health professional.